We were delighted to be joined last week by Year 12 student Alice Dunn for a week of work experience in Special Collections. Below Alice shares some of her impressions and reflections on her experience. We would like to take this opportunity to thank Alice for her excellent work and wish her every success for the future.

My name is Alice Dunn, and I have spent a week in a work experience placement with the special collections and archives department of the University of Exeter. I am a year 12 student at King Edward VI Community College in Totnes, and very luckily for me the special collections team have been kind enough to facilitate my fascination with literature and history, and by extension with the vast collections kept here! 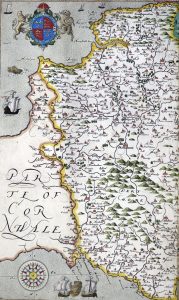 My placement began on Monday with an introduction to the collections and the work done regarding them, including their preservation and conservation. I measured the temperature and humidity in each of the rooms archives were stored in, and recorded these daily observations to ensure these conditions were optimum; extremes of either temperature or humidity can damage the items. What was particularly exciting was learning to handle the materials – there were a number of different items with which I was able to practice, including a 1579 hand-coloured Atlas of the counties of England, produced by Christopher Saxton! I learned that the best way to handle these materials is not, in fact, with gloves (with the exception of photographs), as their role in reducing dexterity increases the risk of tearing pages, but instead with clean hands. This direct contact with history was unlike anything I had ever experienced before; while I have learned about these time periods in history, or read new editions of texts, to handle materials which are hundreds of years old brings a sense of connection with the past that I do not think I could have otherwise felt. Down to the very knowledge that the ink on that page was handwritten by someone who experienced the things I have learned about from books, or to read the annotation of readers, like me, who annotated books they read, but in the 16th century (not like me!), my experience with archival materials has allowed a cohesion of my knowledge, ensuring enrichment in my future learning. While looking around the collections, I was also fortunate enough to be shown materials such as a sheet from a 1478 Caxton print of Chaucer’s ‘The Canterbury Tales’, and Golding’s handwritten manuscript of the first draft of The Lord of the Flies, (though, due to its fragility, handling is avoided), both of which resulted in vast amounts of excitement on my part! 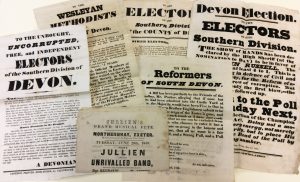 Over the next few days, I was given a few projects to work on. On Tuesday, I sorted through letters to, from, and regarding, Agatha Christie, (some of which were handwritten by Christie herself!), selecting those that were relating to Poirot for an exhibition to go alongside a talk on him. After this experience I feel I am justified in stopping anyone from criticising my handwriting again, or else admitting that Christie, despite her literary genius, may not have been popular among teachers or A-Level examiners! I also looked at a collection of political bills from 1835 and researched the context behind these to aid the writing of a social media post about them, and the information I learned from this seems since to appear in my day-to-day life with astonishing frequency (namely in Middlemarch, which is active in its discussion of 19th century politics!). Throughout the week, I also accompanied team members in receiving and unpacking new materials that had arrived in the post, learning about the process of ‘accession’ before cataloging, and how to write titles and descriptions for these so that they can be best found by researchers. As part of this, I studied a recently received item which has not yet been cataloged, creating resources like a map on which all the places mentioned are flagged, as well as using university records to find out more about the individuals mentioned. This will ensure the item is better understood, so that when it comes to cataloging it can be organised in the collection more easily, and so that its description will be as accurate as possible, making it more accessible to researchers. 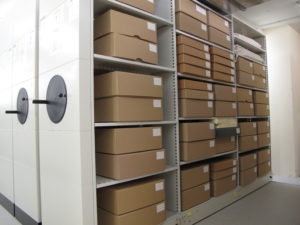 Archives in the strongroom

In aiding retrievals to accommodate researchers’ requests, and reshelving after the resources have been used, I also came to learn about the organisation of the archives themselves. The breadth of the collections means the system in place is integral to ensuring they can be fully utilised by others, and thus learning about the system of cataloging here, and the differing one in the Bill Douglas Cinema Museum where I was fortunate enough to be able to get a tour and speak to staff, has given me a much deeper understanding of the day-to-day process of keeping archives.

On Thursday, the staff at special collections had arranged for me to visit the closely interlinked Digital Humanities Lab at the University. I was given a tour of the building, and was fascinated to learn the role technology can have in the study of humanities, both in relation to archival materials and not. Due to the fragility of many of the items, including wax figurines and skulls, many objects will have 3D printed copies made to enable hands-on interaction. The intersection between archives and photography was something I had never thought about, but constitutes much of the work done by the Digital Humanities Lab – they have two purpose-built photographic studios, enabling photos to be taken in such high-quality, flakes of paint can be seen on the surfaces of pages. The Exeter Book (a book of Old English riddles from the 10th century, some of the oldest surviving pieces of English literature today) is owned by Exeter Cathedral, and while it is not linked to the university nor their collections, it was recently photographed and digitised by staff at the Digital Humanities Lab using their specialist photographic equipment. Having attended seminars and lectures with universities on the poems and riddles in this book, the accessibility created by technology is of importance to me, and thus it was fascinating to discover the work that is done to aid this.

While I was initially most attracted to this work experience placement from more of a researcher perspective – I’m always fascinated by materials which can tell me more about my areas of interest – it has resulted in a better understanding of what it means to be an archivist, and, as a consequence, an interest in the role for its own sake; whether or not the collections I have looked at in my placement have been relevant to what I want to study in the future, they are intriguing in themselves, and not because they relate to what I already have knowledge of. I have had the most enjoyable week learning new skills and information – I don’t think I could’ve found another placement that so well supported my interests, while expanding my knowledge of everything! A big thank you to the Special Collections and Archives team for being so accommodating! 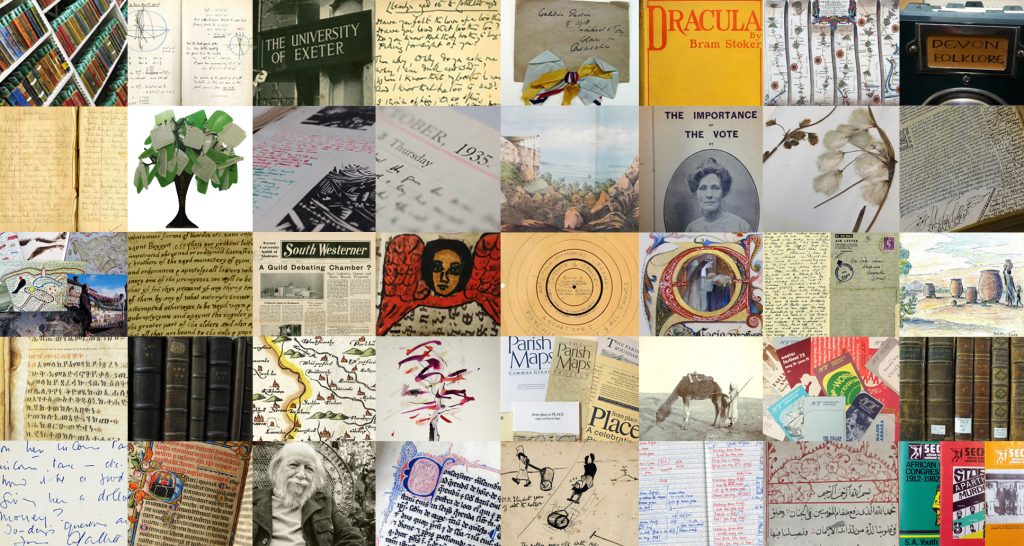 Collage of images from the University of Exeter Special Collections

1 thought on “‘This direct contact with history was unlike anything I had ever experienced before…’: Reflections on work experience in Special Collections by Alice Dunn”