We are delighted to announce that recently-acquired archive material of the novelist Daphne du Maurier has been catalogued and is now available to access for research. The collection comprises literary, personal and family papers that were created or compiled by Daphne du Maurier, and which for many years had been looked after by her close friend, Maureen Baker-Munton. At an auction held at Rowley’s Auction House in Ely on 27 April 2019, items from the collection were sold, and the University of Exeter was successful in purchasing several auction lots. The acquired material complements and expands the already existing collections relating to Daphne du Maurier held at the University of Exeter Special Collections. 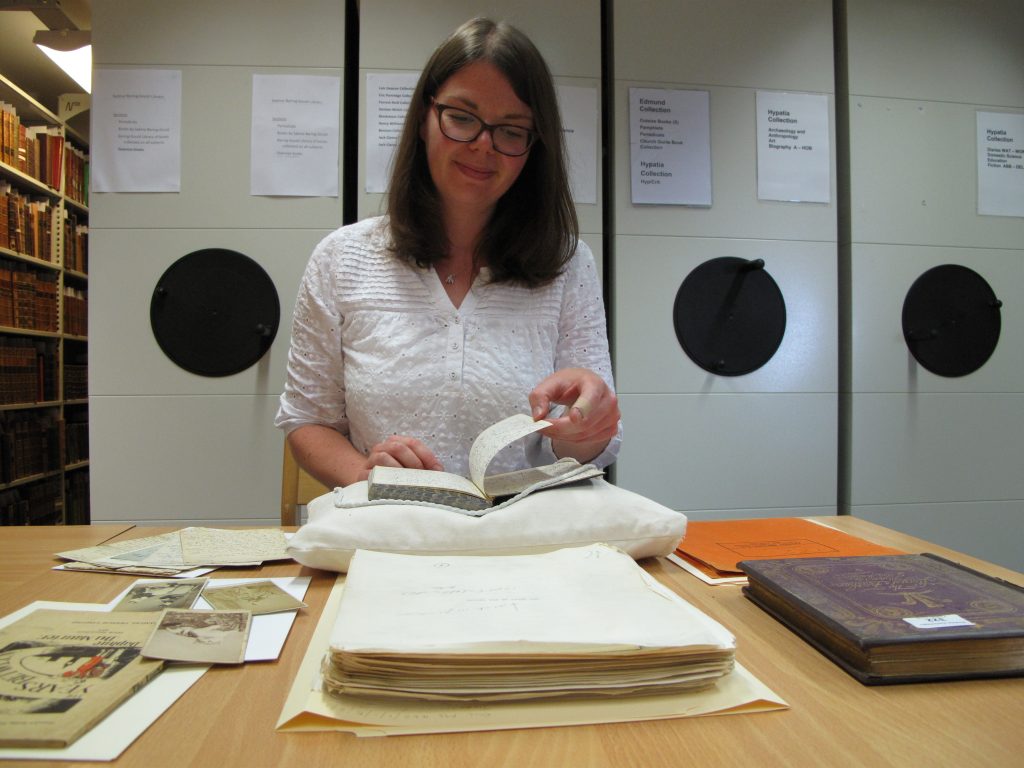 Archivist with items from the collection

What makes this material different to some of our other Daphne du Maurier collections are the curatorial elements added by Maureen Baker-Munton. Many of the papers are annotated by Maureen with names, memories or explanations, which not only add extra contextual information about the items, but also provide insight into the close friendship between Daphne and Maureen.

Maureen Luschwitz was born in India in 1922. Following the outbreak of the Second World War, she joined the armed forces in India, through which she met Frederick Browning (more commonly referred to as ‘Boy’ or ‘Tommy’), the husband of Daphne du Maurier. He employed her as his personal assistant and she continued working for him when they returned to England In July 1946. Maureen also became a part-time secretary to Daphne du Maurier, and from this initially work-based relationship, a close and lifelong friendship grew. In 1955, Maureen married Monty Baker-Munton (also referred to as ‘Bim’) with whom she had one child. In the 1970s, Daphne du Maurier asked Monty to be her literary executor and Maureen to be her power of attorney. They supported and cared for Daphne du Maurier until her death in 1989. Maureen Baker-Munton died on 03 January 2013, aged 90. (Source: ‘Maureen Baker-Munton (1922-2013) – a short essay inspired by the sale of her archive of Daphne du Maurier related material’ by Ann Willmore (2019), available at https://www.dumaurier.org/menu_page.php?id=147)

Over the past few months, the collection has been catalogued, with each file or item receiving a unique reference number and a contents description on our online catalogue. This will enable the material to be much more easily searched and accessed for research now and in the future. Although any original arrangement of the material was lost through its sale at auction, our collection of items seemed to naturally fall into the three distinct sections: literary papers, personal papers and family papers. You can find the hierarchy of the collection on our online archives catalogue.

The section of literary papers includes drafts of some of Daphne du Maurier’s novels, short stories and scripts. A particularly interesting item is a manuscript notebook containing plot notes for the novels ‘Le Remplaçant’ [‘The Scapegoat’], ‘The House on the Strand’ and ‘The Flight of the Falcon’. Also included in the section of literary papers is a fascinating assortment of draft poems, which include some written by Daphne du Maurier when she was in her early twenties, as well as others that she wrote in the final decade of her life. Drafts of forewords, articles and essays by Daphne du Maurier are also present, as well as a typescript draft speech written by Daphne du Maurier for Queen Elizabeth II’s Christmas Broadcast in 1957. Intriguingly, some elements of this draft appear to have been incorporated into the Queen’s Christmas message that was broadcast via television. This section also includes papers relating to the lawsuit brought against Daphne du Maurier in the 1940s due to claimed parallels between ‘Rebecca’ and a short story and novel by Edwina Lewin MacDonald. These papers complement an item from another of our collections of material by Daphne du Maurier: the ‘Rebecca Notebook’ (EUL MS 144/1/1/4), which is stamped as having been presented as an exhibit in court in 1947.

The section of personal papers mainly comprises correspondence and items of ephemera. These include a folder of 40 letters written and sent by Daphne du Maurier to Maureen and Monty Baker-Munton between 1947 and 1965. The correspondence in this file covers the period from when Maureen Luschwitz began working as personal assistant to Frederick Browning and as part-time secretary to Daphne du Maurier in the 1940s, through to 1965, by which time the relationship between the du Maurier- Browning family and the Baker-Munton family had developed into a close friendship. The letters from Daphne du Maurier concern a range of personal matters, including daily life, family, friends, travel and health.

The third and final section comprises family papers concerning or created by various ancestors and relatives of Daphne du Maurier. These include original letters from her paternal grandfather, the artist and writer George du Maurier, to his mother, Ellen du Maurier; to his future wife, Emma Wightwick; and to his friend and fellow artist, Thomas Armstrong. Also included within the section are a small number of papers of Muriel du Maurier, née Beaumont, a stage actress and mother of Daphne du Maurier. Daphne du Maurier’s maternal relatives featured very little in our du Maurier collections prior to this accession, so we are particularly pleased that this collection includes papers and photographs of Muriel du Maurier, Muriel’s mother, Emily Beaumont, and her sister, Sybil ‘Billie’ Beaumont. The family papers also include one box of photographs of Daphne du Maurier and her relatives, dating from c 1880s to 1960s.

It has been a great pleasure and a privilege for me to catalogue this collection, and especially to get to know Daphne du Maurier and her friends and family through the form of time travel that only archives enable! The Special Collections team warmly invite anyone interested in working on this collection to get in touch. We look forward to seeing how the collection will be used and the avenues of research it might open up.

Descriptions of all the material in this collection can be browsed via our online catalogue and accessed in our reading room by advance appointment (at least 48 hours’ notice). You can find more information about visiting us and how to book an appointment here. Please note that due to copyright restrictions, photography or copying of the material is not possible without prior permission from the copyright holder.