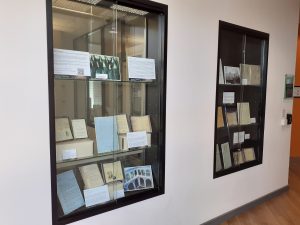 The new display outside the Ronald Duncan Reading Room

We were delighted to recently welcome Rosie and Scarlett, two Year 12 students from Colyton Grammar School, for a week of work experience at Special Collections. Their task for the week was to create a new display focusing on the Syon Abbey Collection, which involved handling, researching, digitising and curating a selection of rare books and archival items.

The new display is open to everyone and can be found by entering the Old Library on Streatham Campus via the main entrance, turning right at the barriers and walking down the corridor towards Seminar Room A/B. The display is located on the right outside the Ronald Duncan Reading Room.

Scarlett and Rosie have kindly sent us their thoughts and impressions of their week of work experience in Special Collections, which you can read below. We would like to take this opportunity to thank Rosie and Scarlett for their excellent work and wish them every success for the future. 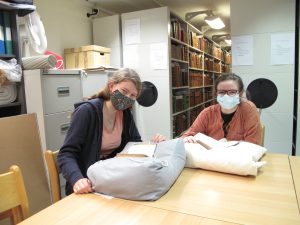 Rosie and Scarlett handling books from the Syon Abbey Library

When I first started work experience at Special Collections, the only time I had seen books older than two hundred years was behind a glass case but by the end of my time I had handled plenty of rare, old books safely.

During my time there I had the opportunity to research extensively and explore their Syon Abbey collection and helped develop a display on it with the other work experience member.

To start with, we began to research Syon Abbey and looked into the vast history of the abbey, its community and the nuns there. As one of the oldest English Catholic communities to continue meeting throughout the Reformation there was much to cover and explore and our research was well aided by the vast collection of such treasured books that brought to life the history of Syon Abbey in our hands.

We also learned how to handle old and delicate books and spent time making sure we would treat them correctly whilst researching. Well accompanied by our book snakes and cushions – tools that help support particularly old books – we began our research. 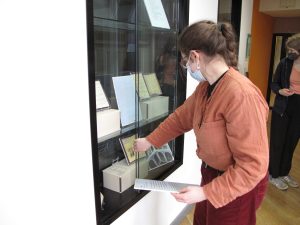 To find a starting point, we searched for inscriptions made by the nuns in their books and made note of them. At times handwriting was indecipherable but that difficulty was rewarded with the satisfaction of seeing one nun’s distinctive handwriting or name in multiple books. Their inscriptions ranged from jokes regarding piety, descriptions of nieces getting married or just their own names.

Next, we decided on four nuns to focus on, each of us researching two in great detail for the display. This gave us a wide scope of the abbey as the nuns were from different times and fulfilled different roles for their community. We both created biographies for our nuns which gave a broad overview of what their day to day life would have been like and what they did in the abbey.

Finally, we began putting the last touches together for the display which entailed photographing documents, mounting them on boards and arranging our text and images to create an engaging display. 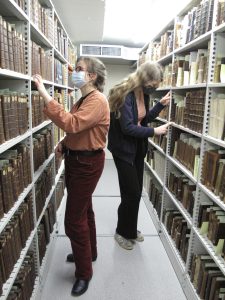 I spent the last week with the Department of Special Collections at Exeter University for my Year Twelve work experience, and it was amazing. I was a bit nervous when on the first day, and took a lot of comfort in the fact that one of my friends from school, Scarlett, had the same work experience, but I really shouldn’t have worried. My supervisor for the week was Annie, who was absolutely lovely and so helpful, and while I didn’t speak to the other members of the department as much as they were working on their own projects, I still felt so much like part of the team.

Special Collections works with significant historical documents and manuscripts, especially from people who were connected to the South West. For example, there is an extensive William Golding archive – author of Lord of the Flies – , which contains artefacts such as correspondences between Golding and publishers and his friends, as well as the original manuscripts of some of his works, like the Lord of the Flies manuscript.

Scarlett and I, however, were working on the Syon Abbey collection, which involves a great majority of the extensive library of the nuns of Syon Abbey. They had a fascinating history originating in England, traveling around Europe due to external pressures, significantly to Lisbon, and finally returning to England, mainly based in Chudleigh and South Brent, which is where the link to Devon comes in. During our stay, we got to look at and handle books from as far back as the seventeenth century, which was an amazing opportunity. I almost couldn’t believe it! Before we were allowed to handle these precious artefacts, we were trained in the correct way to take the books out of shelves and read them without damaging the spines or the pages. There were a load of things that I had never considered, like what we called book snakes, which are soft weights to hold the pages flat while you read, while not putting oils into the pages like holding it with your fingers would. 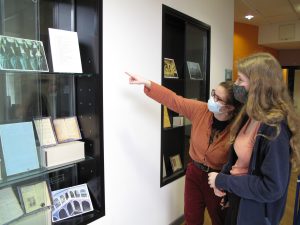 Our task for the week was to create a display about Syon Abbey, so we took quite a few old books and manuscripts out of the library to help us. We went through each book to see which nun had owned each book, and if they had written anything particularly interesting. The majority of them only had a name at the most, but the few that had more were intriguing and occasionally hilarious. My personal favourites of each were, respectively, an account of Napoleon invading Portugal and the subsequent consequences, and one joke about not being able to trick God, but by keeping a religious book she could trick her peers. We narrowed down our options of nuns to research, and chose two nuns each to focus on for the display. I chose Sister Constancia Sorrell – who recorded Napoleon invading – and Lay Sister Mary Gomes – who joked about not being able to trick God.  I think that one of the best parts of the week was constructing the actual display, and seeing the outcome of all our hard work, which I, at least, am very proud of. It felt a bit like being an interior designer, as we wanted the display to be eye-catching and visually appealing while still conveying the interesting things that we learnt in the week, and hopefully getting other people interested in the subject and the monastery. We had to establish a title for the display, and while I’m disappointed that my various nun puns were vetoed, – I was particularly fond of “Nun so Faithful”- I thought that “Her Book” was equally effective, with the reference to how they wrote their names in their books, for example, “Mary Gomes her Book” and also with the extra reference to the “Book” as the Bible.

In the end, the week was so fun and interesting, while also feeling productive and like we achieved something, and I have definitely gained a new respect both for the nuns of Syon Abbey, and for the archivists at Special Collections who work with so many precious artefacts and make them accessible to people like you and me.

I would like to thank everyone who works at Special Collections for being so helpful and welcoming, and especially Annie who made our week there so memorable.

I hope that this has encouraged anyone reading this to think about visiting or researching either Special Collections or the amazing history of the nuns of Syon Abbey.