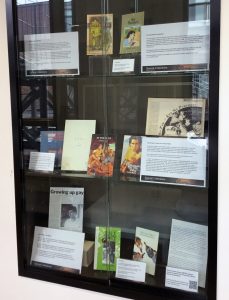 To celebrate LGBT+ History Month in 2022, a new display featuring items from the University of Exeter’s Special Collections has been installed in the Old Library. The display explores themes around sexuality in the David Rees literary papers and book collection, including items such as book covers, manuscript and typescript drafts, and newspaper articles. The display is open to everyone and can be found by entering the Old Library on Streatham Campus via the main entrance, turning right at the barriers and walking down the corridor towards Seminar Room A/B. The display is located on the right outside the Ronald Duncan Reading Room.

David Rees was an author, lecturer and reviewer, born in Surbiton. Previously married with two children, he came out as a gay man in 1974. In 1968, he moved to Exeter to take up the position of lecturer in Education at St Luke’s College, which merged with the University of Exeter in 1978. He remained at the University until 1984, when he retired early to write full-time.

Rees was a prolific writer, producing more than thirty works between 1975 and 1993. He also regularly wrote literary reviews and articles for magazines and newspapers, including Gay News and Gay Times. He is best known as a writer of novels for children and young adults.

A common theme in David Rees’ fiction is sexuality, and many of his novels are about the experiences of gay teenage boys discovering and embracing their sexual identity. These novels were noteworthy amongst other young adult books of the 1970s and 1980s in their positive portrayal of gay sex, relationships and love. The novels Quintin’s Man (1976) and In the Tent (1979) were the first books for young adults in the UK to have central gay characters. 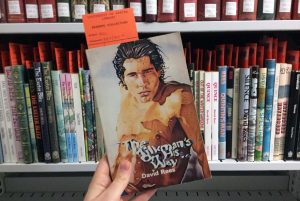 ‘The Milkman’s On His Way’ by David Rees

In 1987, The Milkman’s On His Way (1982) sparked a nationwide debate on access to gay fiction for young people, after a student complained that the book wasn’t available in their school library. The book was subsequently banned from many school and public libraries in the UK. Due to its positive and detailed descriptions of gay sex, the book was also cited in Parliament during the Section 28 debates in 1988 (Section 28 of the Local Government Act was brought in to ‘prohibit the promotion of homosexuality by local authorities’). However, the archive shows that many other people – including librarians, teachers and young people – also spoke out in support of the book.

Sexuality remained an important theme in David Rees’ later works, many of which were written for an adult audience, including Watershed (1986) and Twos and Threes (1987). In 1985, David Rees was diagnosed as HIV positive. This influenced him to write the novel, The Wrong Apple (1987), a story about a young man who discovers he has AIDS and finds love and support from a new friend. In his autobiography Not For Your Hands (1992), Rees reflected on his experience of coming out in 1974, and the positive impact this had on his personal life and writing career, stating: ‘my growing acceptance of myself as a gay man was freeing me as a writer’.

David Rees lived and worked in Exeter for most of his life, and time and again the city and its history inspired his stories. In 1978, David Rees was awarded the Carnegie Medal for The Exeter Blitz. In his acceptance speech, Rees spoke of the importance of Exeter to his writing, stating: ‘I’m drawn to it, again and again, as to a magnet…I’m glad it’s The Exeter Blitz that has won the Carnegie; it’s a tribute to that other major influence on me, the place where I live and work’. At least six of David Rees’ stories were set in Exeter, including Quintin’s Man (1976), The Ferryman (1977), Risks (1977), The Exeter Blitz (1978), The House that Moved (1978) and In the Tent (1979).

Books by David Rees in the Reserve Collection

The University of Exeter Special Collections holds the David Rees Collection, which
includes literary papers as well as Rees’ own copies of his published works. The collection was donated by the Rees Family to St Luke’s Library in 1993. The literary papers include original manuscript and typescript drafts of his novels, short stories, poems, reviews, articles, speeches and interviews; and correspondence, reviews and clippings relating to his works.

The literary papers of David Rees have been catalogued under the reference number EUL MS 271 and can be browsed on the online archives catalogue.

Books by David Rees are held within our Reserve Collection and are catalogued under the classmark Reserve 828.9/REE-9. You can browse the titles in the library catalogue.

Items from the David Rees Collection are available for everyone to access, research and enjoy in our reading room.

You can find out more about more the David Rees Collection and other research resources relating to LGBTQ+ history held at the University of Exeter Special Collections in our online guide at: https://libguides.exeter.ac.uk/archives/lgbtq-research-resources