The extremely high temperatures recorded in Britain at the start of this week have pushed the reality of climate change to the forefront of public debate, with many people making comparisons UK weather patterns and those in hotter regions such as the Mediterranean and the Middle East. People living in Britain have long been accustomed to a moderate climate, and therefore infrastructures and working conditions that are not designed for extremes of either hot or cold. 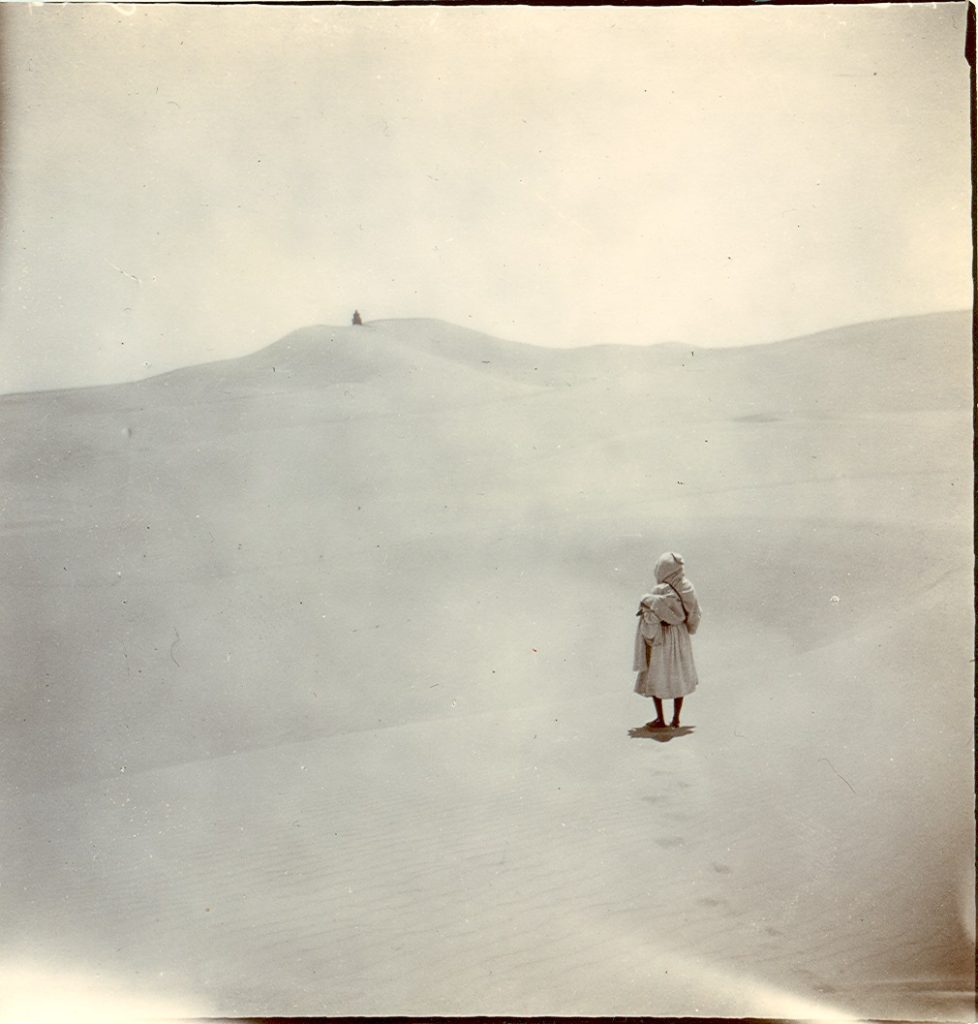 A photograph taken in the Algerian desert by explorer and geographer W.J. Harding King. He undertook scientific experiments into the movement and formation of sand dunes, but his books ‘In Search of the Masked Tawareks’ (London: Smith, Elder, 1903) and ‘Mysteries of the Libyan Desert: a record of three years of exploration in the heart of that vast and waterless region’ (London: Seeley, Service, 1925) contain some intriguing descriptions of rainfall, water supply and unusual weather patterns in North Africa. (EUL MS 11/19)

For many of those living in the SWANA region – South West Asia and North Africa, or what has commonly been termed ‘The Middle East’ – temperatures of over 40°C, dry arid conditions and low rainfall have long been familiar.  Architectural styles – such as thick stone white-painted walls, covered courtyards and wind towers (used since at least 1300BC to provide a form of air conditioning) – are designed to keep the heat out of buildings, and working hours often incorporate time for a قَيْلُولَة (Qayloulah), or ‘siesta’, during the hottest hours in the middle of the day.  However, the region is looking extremely vulnerable to threats from climate change, with supplies of fresh water, agriculture and food production, all being affected, not to mention the growing frequency of extreme weather conditions – Iraq has been battered by a series of massive dust storms this year, large tracts of previously usable land are undergoing desertification, Oman was hit last year by the first tropical cyclones to be recorded in the Gulf, and – if current models are to believed – many of the cities in the UAE could become uninhabitable by the end of the 21st century due to increases in temperature and humidity.

While scientists continue to analyse these patterns, and politicians and public health officials continue to debate policy changes to mitigate the impact of global warming, they are able to draw on the latest meteorological data and other metrics compiled using cutting-edge technology such as isotope analysis, satellite imagery, salinity levels and microscopic study of minute changes in zooxanthellae algae living on coral reefs. 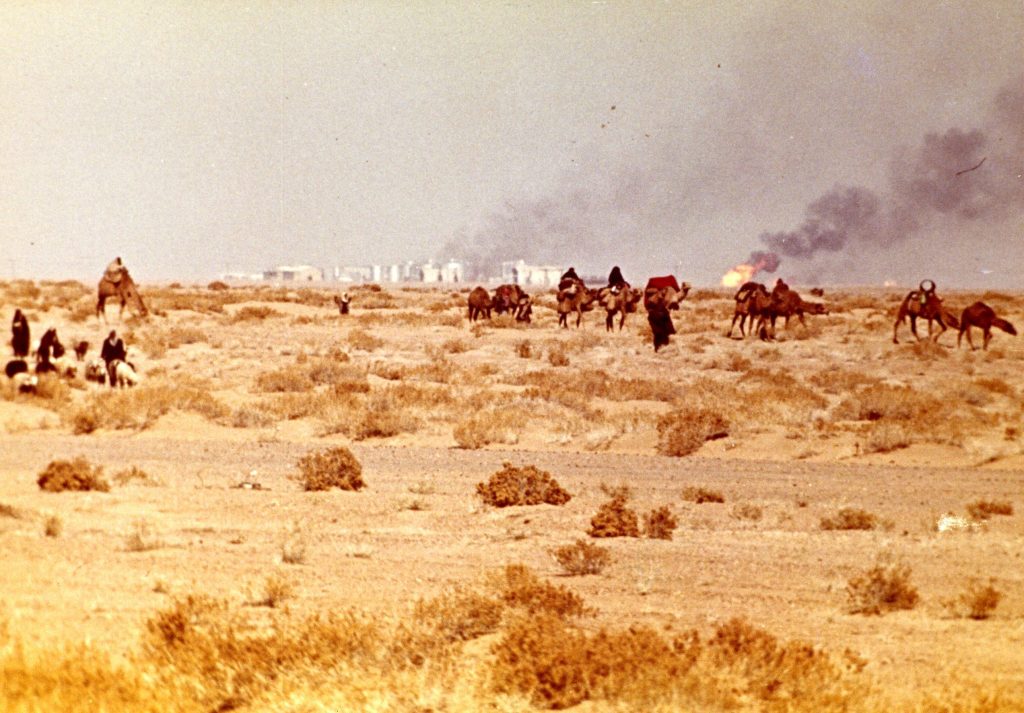 What does the future of fossil fuels mean for the landscape, environment and climate of the Gulf? Photograph of Kuwait in the early 1970s. John Wilton archive, EUL MS 264

What about the past, however? Although we may think of interest in this data as being a relatively recent development, our historic collections in both the archives and the Arab World Documentation Unit (AWDU) contain a considerable amount of information on weather patterns, rainfall and climate in the SWANA region. For merchants and travellers planning long journeys, a knowledge of water resources was literally a matter of life or death, and devising methods of storing and distributing large quantities of water became increasingly important during the decades of rapid urban growth during the 20th century. The falaj system of irrigation used in Oman was the subject of years of study by John Craven Wilkinson, whose archive (EUL MS 119) contains many papers on not only the falaj tradition, but also on climate and meteorology. 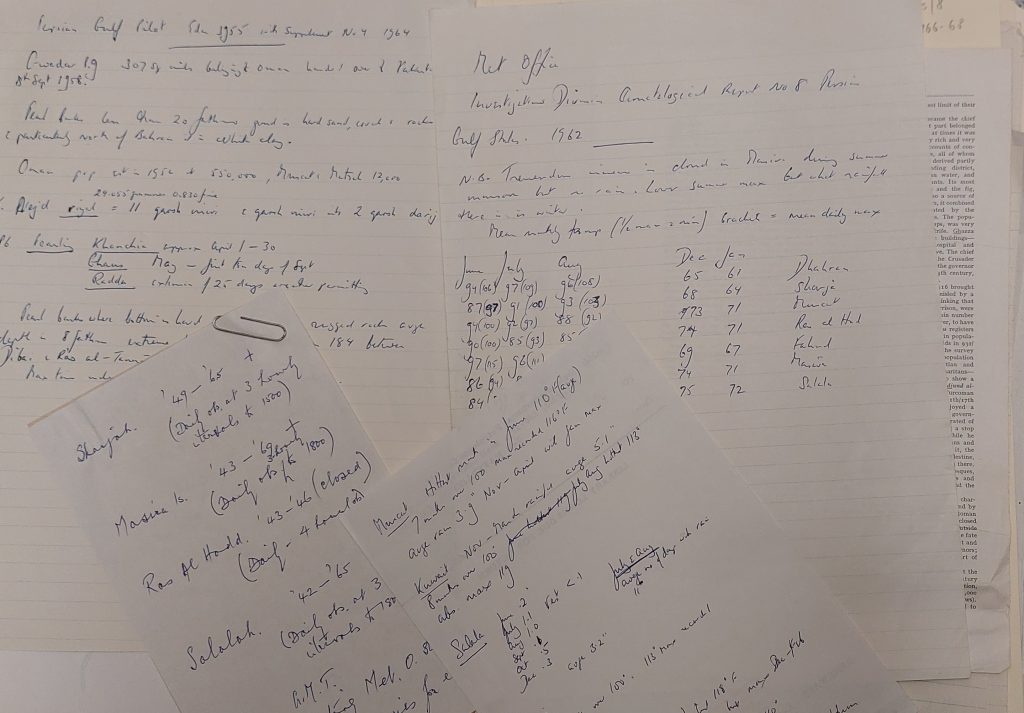 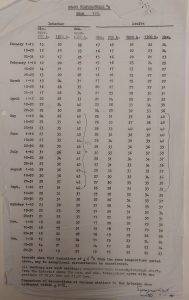 Going even further back in time, we have a book  in Special Collections (Reserve Collection 916.12 LYO/X) by Captain George Francis Lyon, A narrative of travels in northern Africa in the years 1818, 19, and 20 : accompanied by geographical notices of Soudan and of the course of the Niger (1821), which includes a few pages with daily climate data for 1819 – temperature, humidity and wind direction. 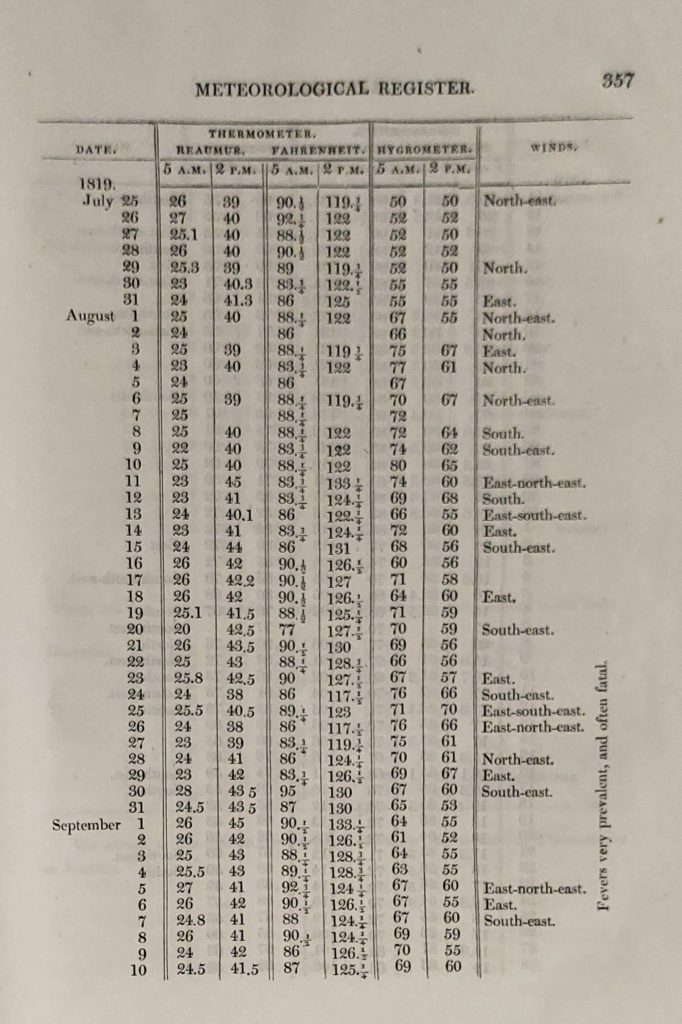 More recently, we have a three-volume work in AWDU on Meteorological data from the ‘Report on the Water Resources of the Trucial States (1969), compiled by the engineering firm of Sir William Halcrow. It includes a wealth of data on rainfall, climate, irrigation systems – including Omani aflaj – as well as maps and statistical tables on what was shortly after renamed the United Arab Emirates. 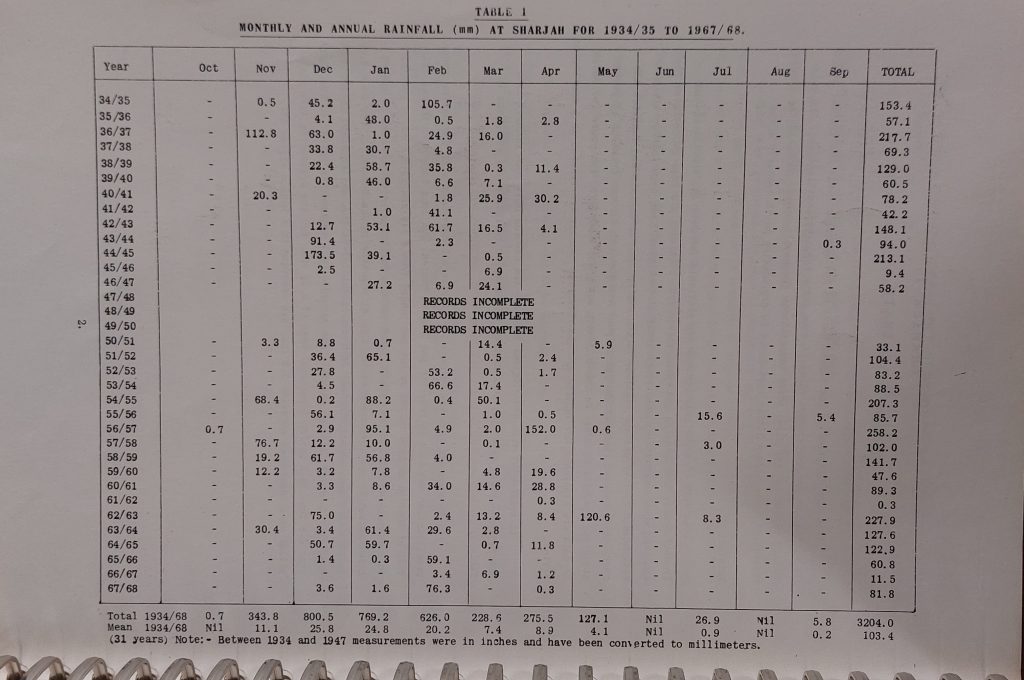 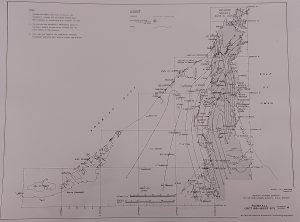 The discovery of oil in the Gulf transformed the economy of the region and brought in massive amounts of foreign investments into geological exploration, drilling and infrastructure. Business on such a scale requires to monitor everything that might affect its activities, and in 1953 the Oil Companies Weather Coordination Scheme (OCWCS) was established as a network to share weather data being gathered by different oil companies working around the Gulf.  We have a small collection of OCWCS publications in AWDU that contain data and guidelines about weather conditions. 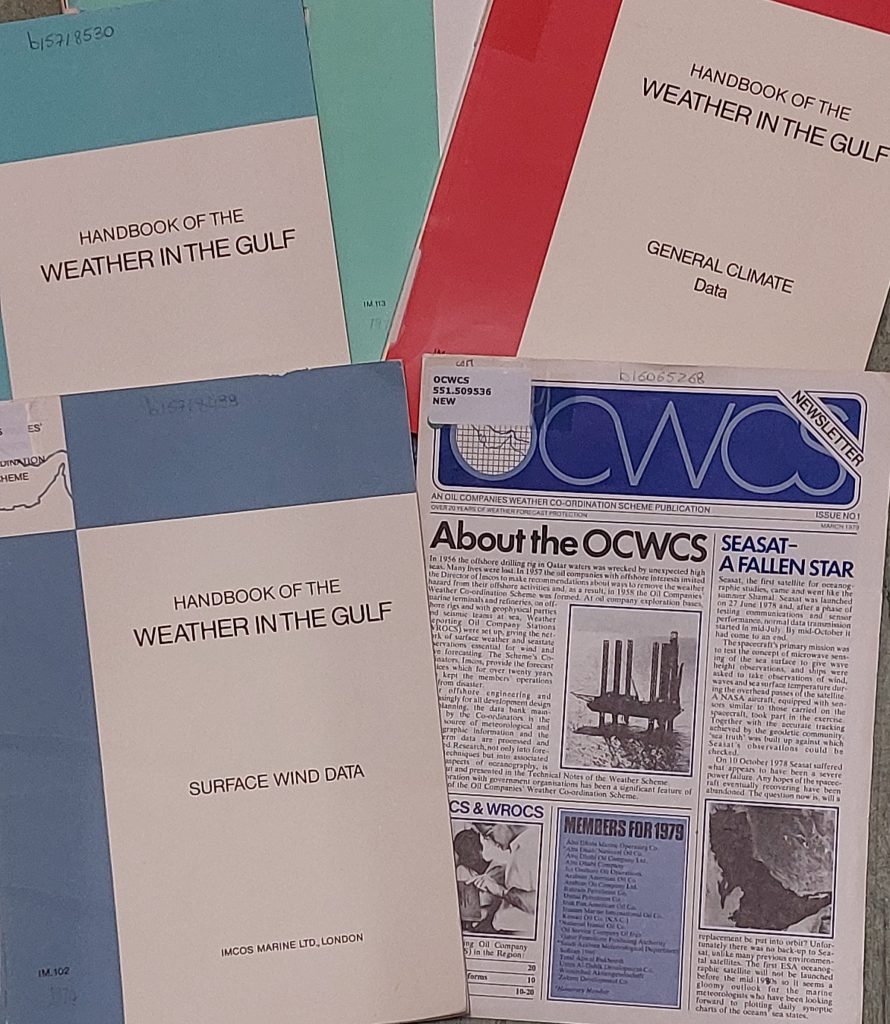 While meteorologists working for the OCWCS or other scientific bodies are studying the natural world around them, the contributions of human actions should also be taken into account. Much of the water shortages in Iraq have been caused by the construction in Turkey of dams on the rivers Tigris and Euphrates, which have greatly diminished the waterflow downstream in Syria and Iraq. Severe and widespread structural damage to water supplies caused by coalition forces during the Gulf Wars and then subsequently by ISIS forces, have only compounded the problem. Deforestation is another issue: Iraq was once famed for its 30 million date palms, which produced hundreds of varieties of the fruit and was a source of pride, particularly in southern Iraq around Basra and the banks of the Shatt al-Arab. The vast majority of these were cut down in the 1980s and 1990s, which – coupled with the reduction of freshwater flowing from the north, and the resultant encroachment of salt water coming upstream from the Gulf – has had a devastating effect on the environment. The lack of trees is a major factor in the dust storms, as the soil dries up and has no roots in its upper layers to hold it together. 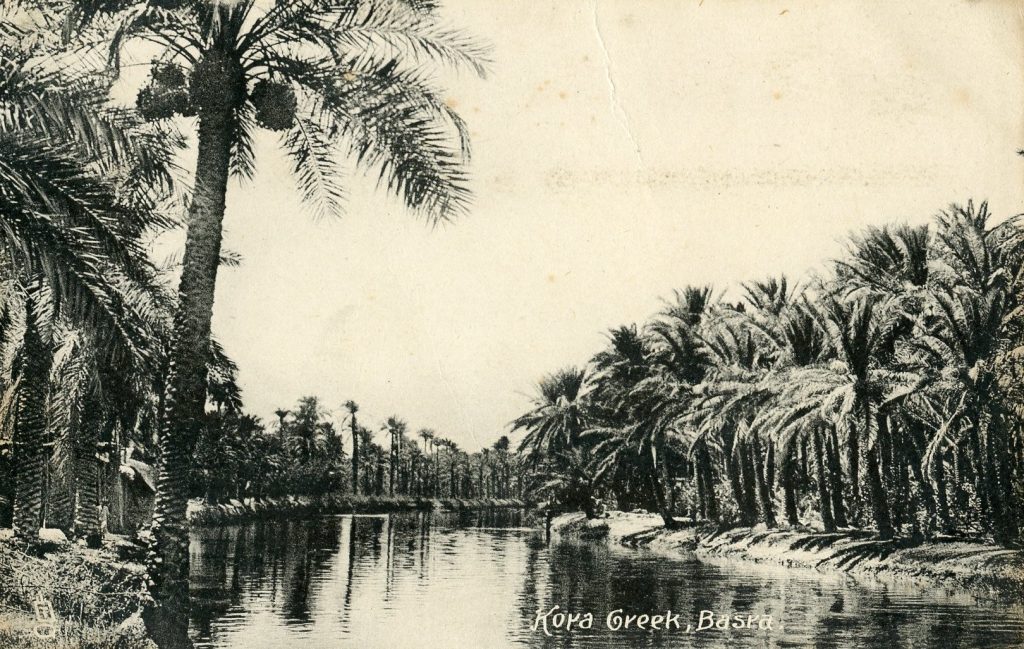 Dense plantations of date palms along the rivers of southern Iraq – sadly, only a fraction of these remain

(It is slightly beyond the scope of this post, but we have a huge amount of material on the history and development of Iraq’s irrigation network and dam-building projects both in AWDU and in the archives, especially in the Jonathan Crusoe archive, as well as publications by the Kurdish Human Rights Project on the Ilisu Dam Campaign and the effects this dam bin Turkey has had on the water supply in Iraq.)

Another example of environmental damage undertaken by the Ba’athist regime is the draining of Iraq’s southern marshes, which was mostly done for political reasons. Saddam Hussein believed the Maʻdān, or Marsh Arabs, had been disloyal during the war with Iran (1980-88), and began a campaign against them (there are some papers on this in the Crusoe archive.) After the failed uprising in 1991 in which the Maʻdān,  Shi’ites, Kurds and others had taken part, many of these groups joined military deserters in taking refuge in the marshes to escape the reprisals that followed. To punish the Maʻdān, render the marshes uninhabitable and deny a hiding place for the refugees, Saddam’s forces constructed embankments to divert the flow from the Tigris and Euphrates away from the marshes, while drainage channels – with ‘patriotic’ names such as the Mother of Battles Canal and the Loyalty to the Leader Channel, were opened up to drain water away to the south. This was not just a form of genocide, but also an ecological disaster on a massive scale, an ‘ecocide’, or destruction of an entire ecosystem. While there was a clear political motive for these actions, it was in fact building on suggestions made by British irrigation engineer Frank Haigh in 1949, reflecting previous attitudes towards marshlands that saw them as inconvenient, inaccessible and unproductive areas of water-logged land. Contemporary concern over the loss of the marshes of southern Iraq reveal how these attitudes have changed, now that so much more is known about the fragility of ecosystems, the delicate balance of biodiversity in these rare habitats, and the close relationship between vegetation, land use and climate. In addition to the environmental damage, changes in climate and weather patterns place heritage sites at risk due to the increased likelihood of natural disasters such as flooding and wildfires.

On the topic of the marshes, AWDU holds various publications, such as maps, environmental reports by AMAR (‘Assisting Marsh Arabs and Refugees’), humanitarian studies, material in the Gulf Information Project documenting the impact of the 1990-91 Gulf War on Iraq’s land and people, books on the Marsh Arabs, modern Iraqi history and pamphlets from the Ministry for Irrigation, as well as a number of documents in the Crusoe archive. 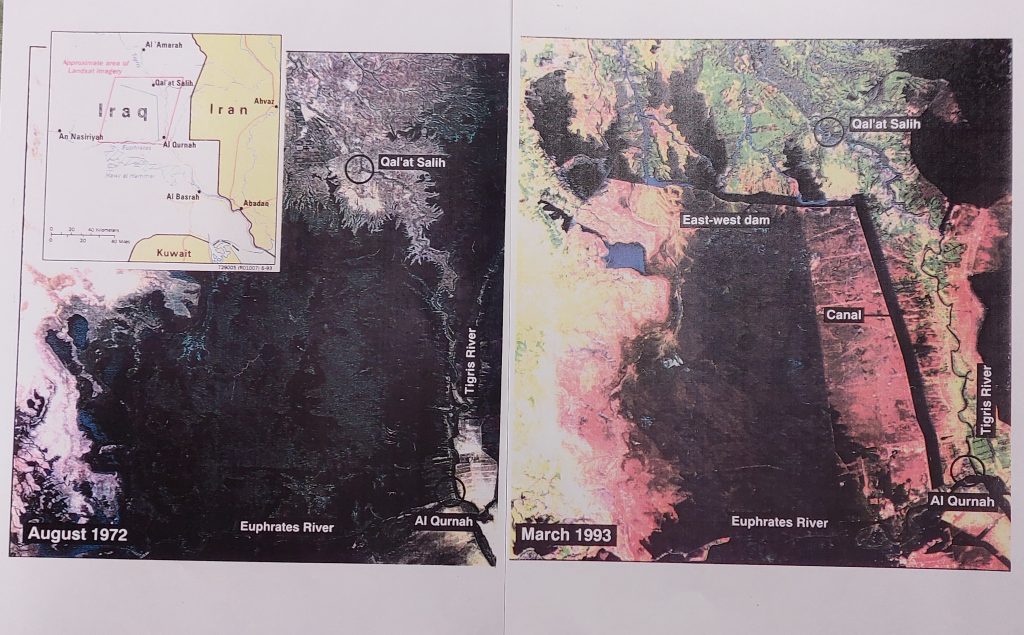 Two comparative maps of the marshes, showing the dramatic changes between 1972 and 1993. Gulf Information Project, Box 19

More generally, we have documents and reports published by organisations such as the Arab Center for the Studies of Arid Zone and Dry Lands (ASCAD), the International Center for Agricultural Research in the Dry Areas (ICARDA). There are also various books in both Special Collections and AWDU that provide histories of specific regions or countries, and which often include descriptions of weather, climate at various times of year, and sometimes even meteorological data – such as the rainfall records for the years 1885-1920 found in the Naval Intelligence Handbook on Tunisia (1945) – as well as specific compilations of climactic data from Saudi Arabia, Oman and Kuwait from the 1970s and 80s.

AWDU also contains a large amount of material on water resources in Yemen, donated by Christopher Ward, author of The Water Crisis in Yemen: Managing Extreme Water Scarcity in the Middle East (2014), and including detailed reports and rare documentation on water resources. There is also some North African material relating to Tunisia and irrigation schemes at Sidi Bouzid and elsewhere. Many of these contain statistical data on precipitation, annual rainfall data and other relevant information.

Exeter University is at the forefront of climate change research, with over 250 researchers working across a range of disciplines.  It’s an exciting, dynamic and ever-evolving area of research, and one for which support might readily be found for new project exploring the historical geography of the Middle East, perhaps looking at changes in attitudes towards seasonal fluctuations, or the awareness of travellers about the importance of ecosystems and the connection between environment and weather.