Eight months have elapsed since I began working on the Syon Abbey archive cataloguing project, and since then I have been cheerfully cataloguing my way through a multitude of fascinating records. You can find out what has already been catalogued via our online catalogue here.

As I reach the halfway point, with a further eight months still ahead of me, I take a look back at some of my highlights of the project so far… A very special collection of records within the archive are the profession papers, which I first looked at in January 2017. The profession papers record the vows made by novices when they officially entered the order (often referred to as ‘simple’ or ‘temporary profession’) and the renewal of these vows at a later period (often referred to as ‘perpetual’ or ‘solemn profession’). The handwritten profession papers in the Syon Abbey archive date from 1607, when the community was living in Lisbon in Portugal, to the late twentieth century, when the community was settled at South Brent in Devon. It is clear that these documents were of great importance to the community, not only because we know they were kept in a safe at Syon Abbey before they were deposited at the University of Exeter, but also due to the very great care that was taken in creating them. The vows have all been lovingly transcribed and signed, and a large majority of the vows have been beautifully decorated, illuminated and illustrated. Below are four examples of vows illustrated by one of the Syon nuns, Sister Mary Stanislas, in the 1920s. I’m looking forward to cataloguing the profession papers soon as part of the ‘Community’ section of the archive. 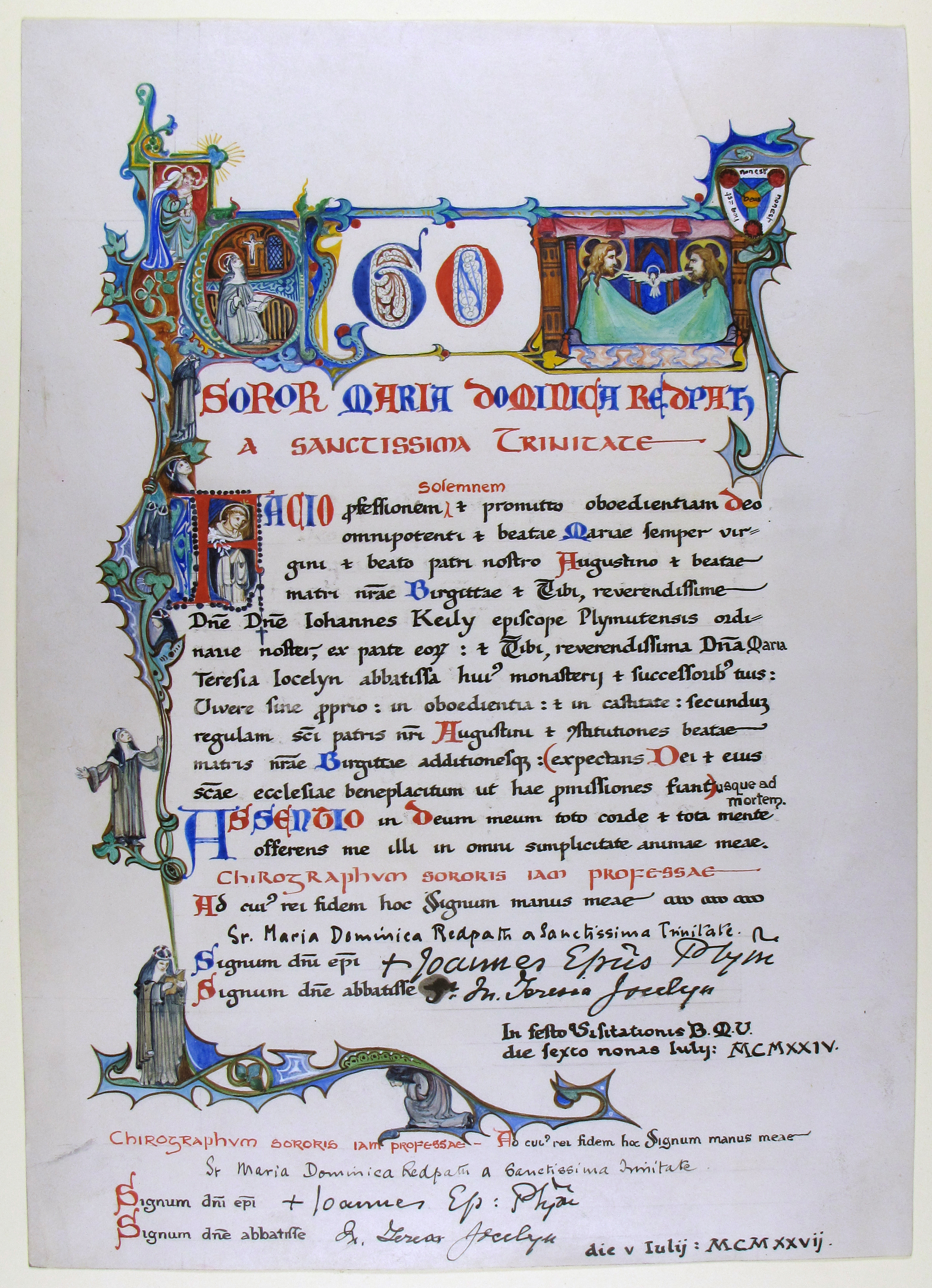 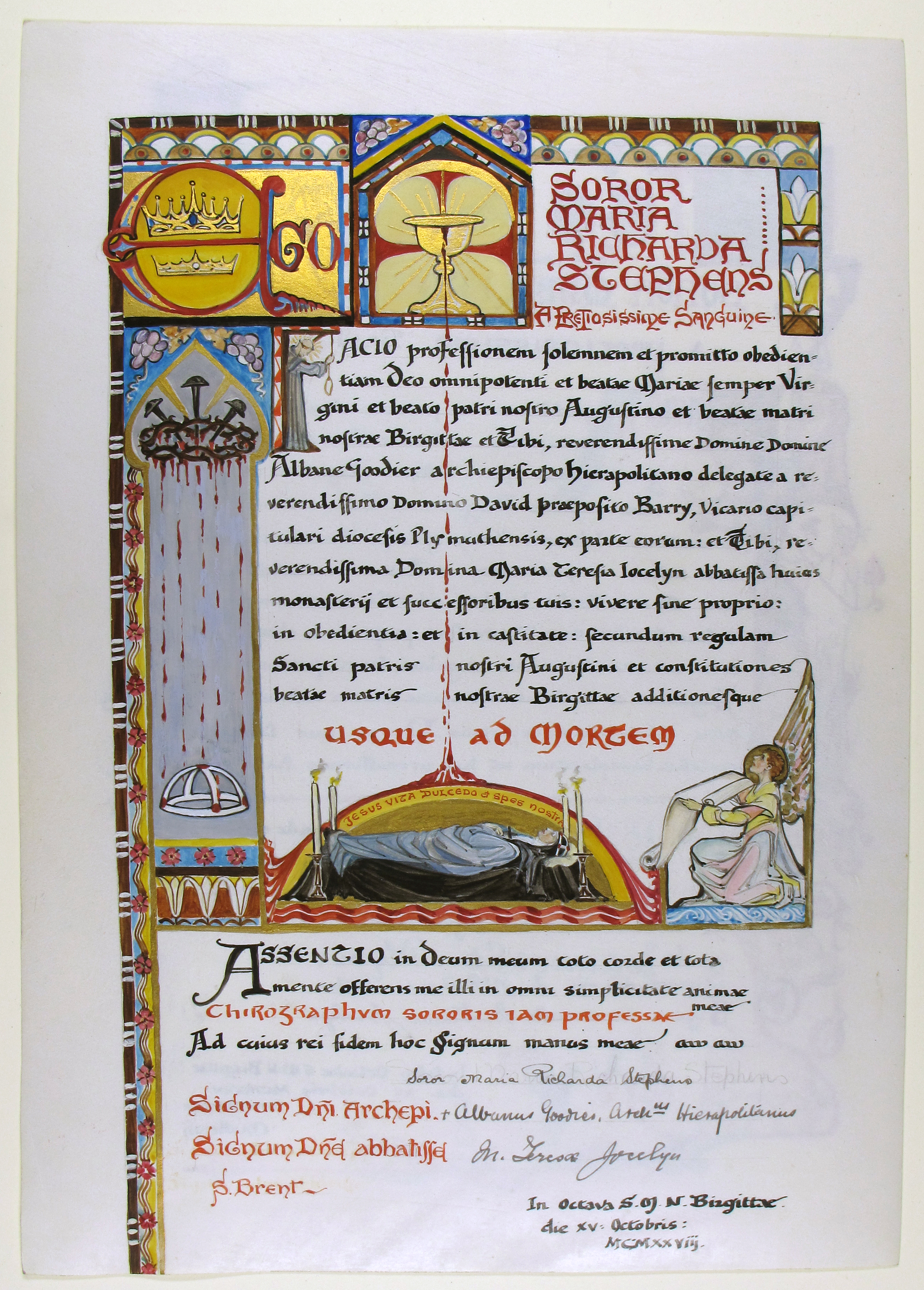 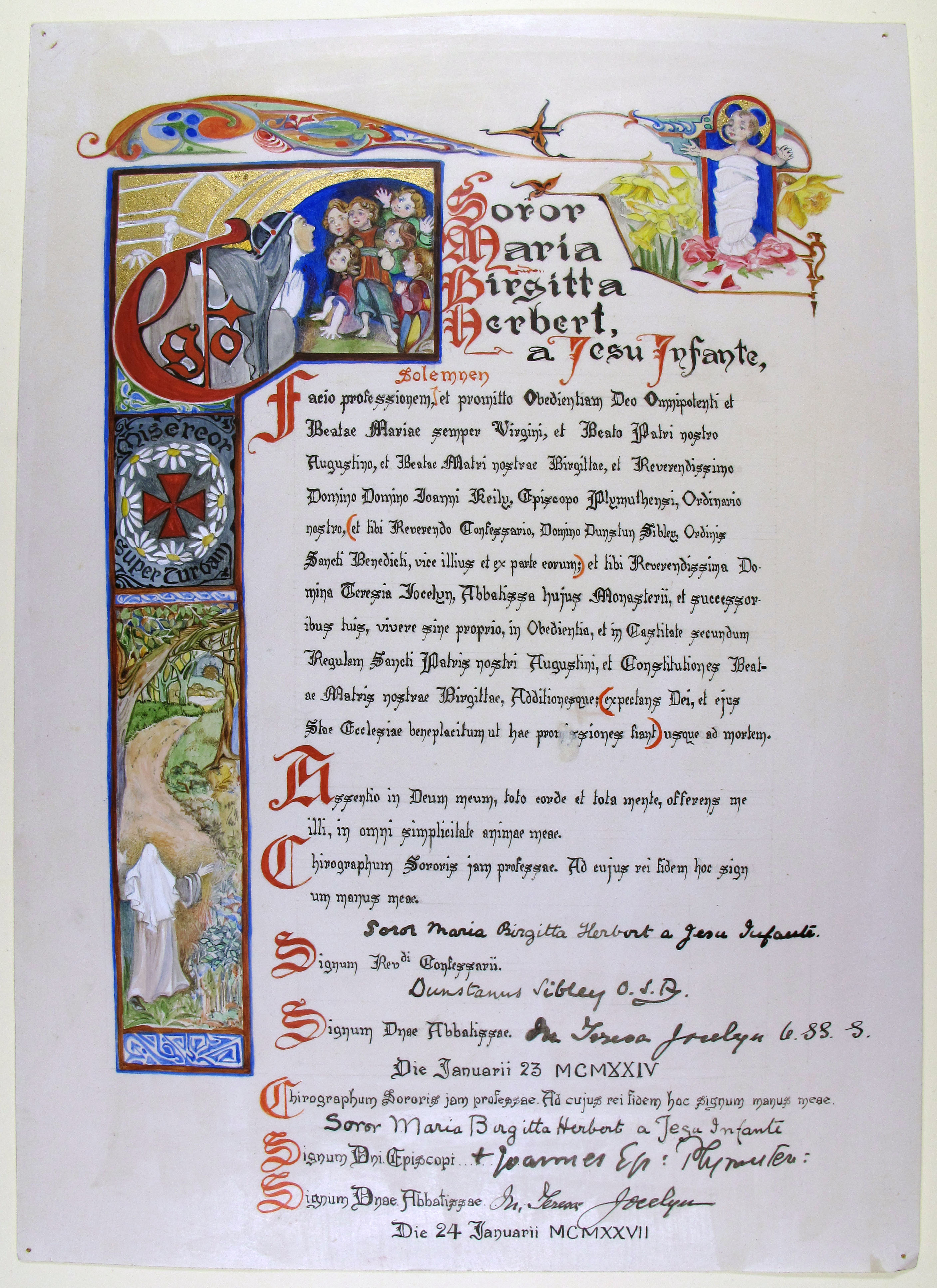 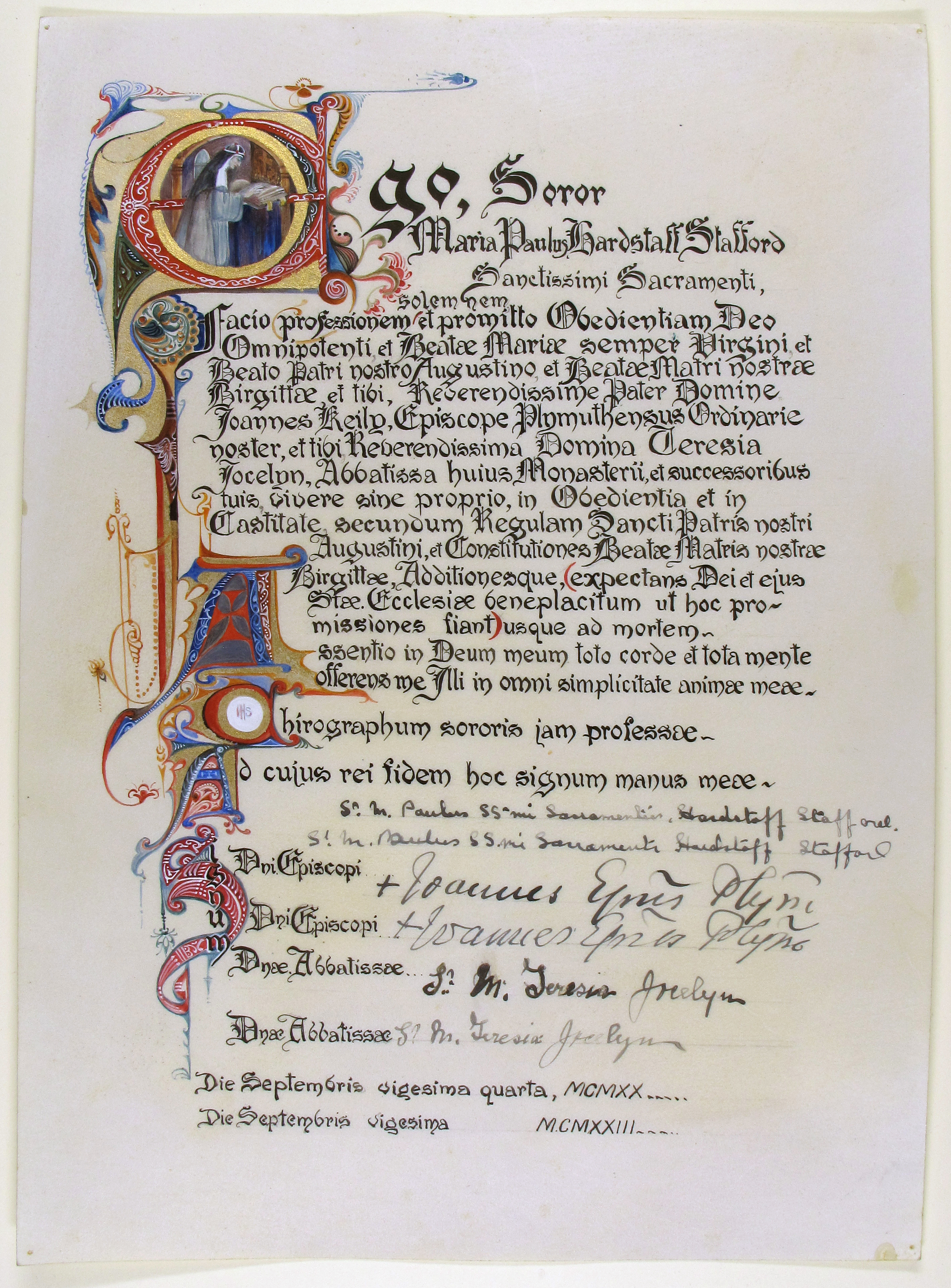 History of Women Religious of Britain and Ireland conference

A great highlight of the project for me personally was the opportunity to attend the annual conference of the History of Women Religious of Britain and Ireland (H-WRBI). H-WRBI is a research network which encourages research of women religious, and includes academics, archivists, students and others interested in the history of women religious. This year the conference took place in June at the University College Dublin and the theme was: ‘Sources: Archival, Oral, Visual, Material, Digital’. I gained new knowledge and insight into current research from the fascinating series of papers, which has proved invaluable in understanding the context of the records I have been cataloguing. The conference also impressed me with the sheer variety of research interests and the different ways in which archives have been used and interpreted by those engaged in the study of women religious. I therefore left Dublin feeling inspired and excited to continue cataloguing the Syon Abbey archive, to ensure the archive is as usable as possible for future research and innovation. The O’Brien Centre for Science at the University College Dublin, where the conference took place.

What the Abbey Cat Saw

Whilst creating a box list of some unlisted boxes in the archive in December 2016, I came across a pamphlet with the rather delightful title ‘What the Abbey Cat Saw’. I was pleased to have another opportunity to look at it in May this year, when I catalogued it as part of the section ‘Syon Abbey publications and printed matter’. This pamphlet was published in 1957 and written by Abbess Mary Magdalen Nevin. Written from the perspective of Punch, the Abbey cat, it describes daily life at Syon Abbey, providing insight into the structure of a Syon nun’s day and the different personalities within the community, as well recounting some humorous incidents involving the cat! You can find the pamphlet in our catalogue under the reference number: EUL MS 389/PUB/2/1. 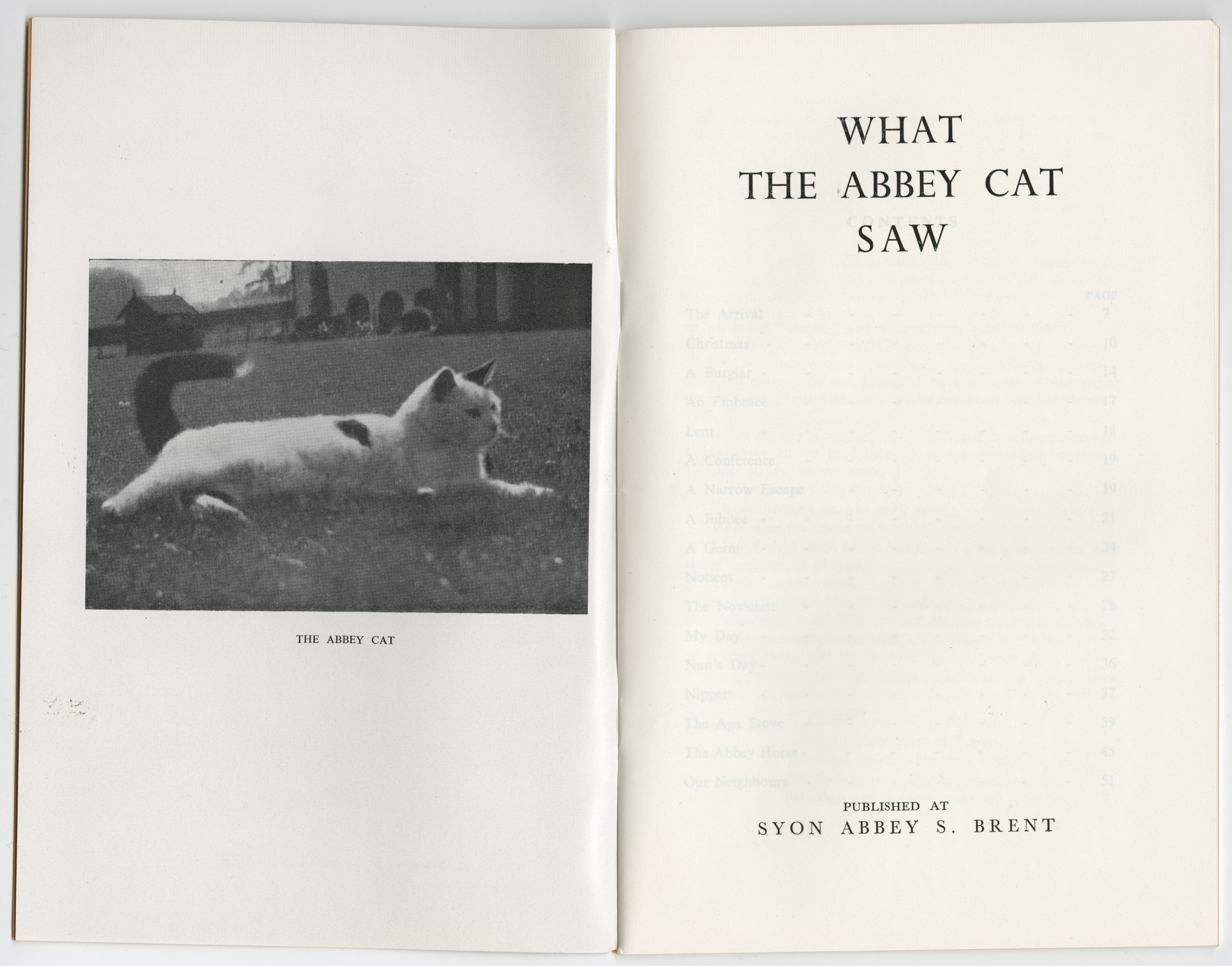 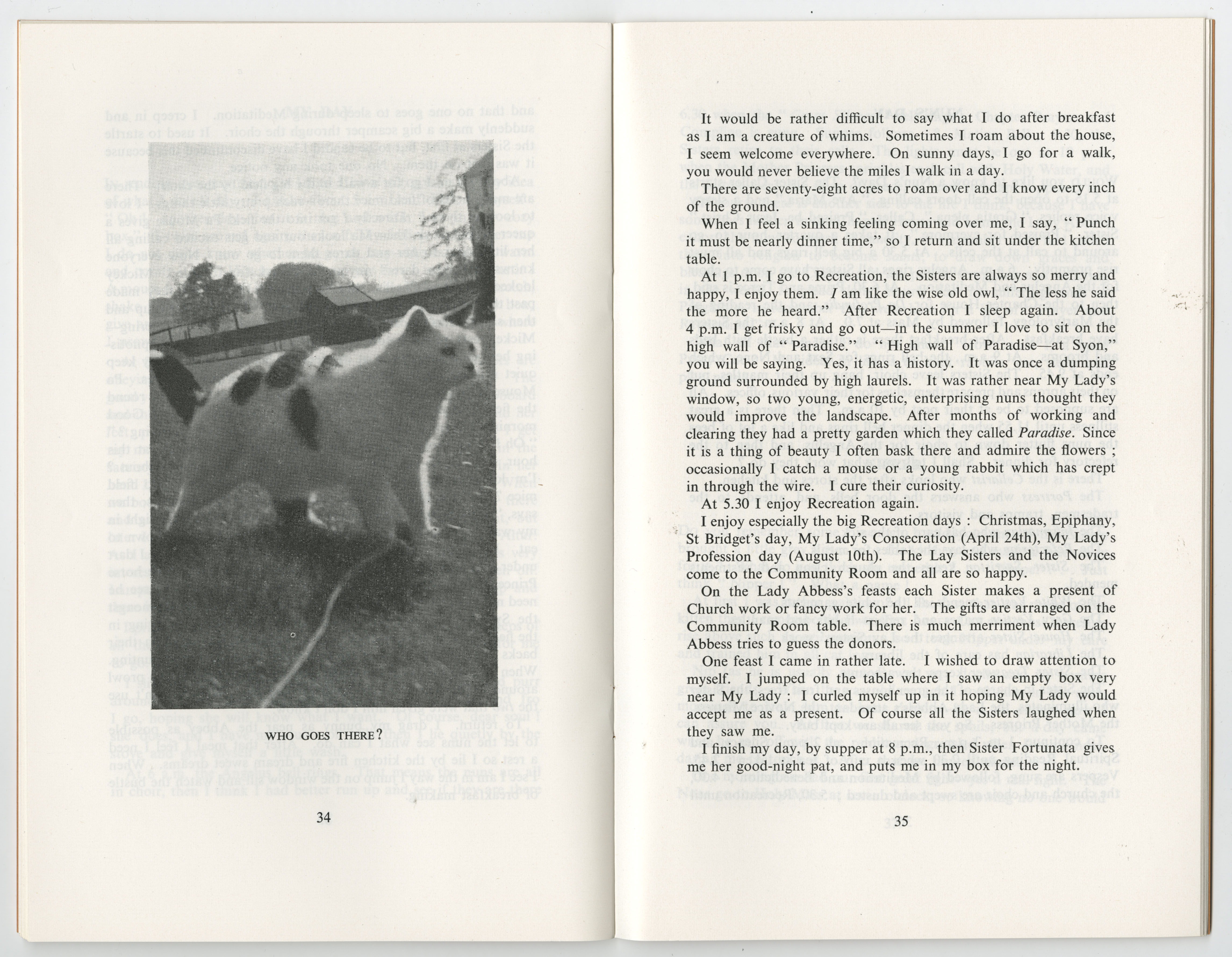 In August 2017, I catalogued the financial records in the archive, including a large number of account books. Within one account book I was startled to discover a fragment of parchment that appeared to be from a medieval manuscript! There was significant fire damage to the fragment; however, it was still legible and had a lovely decorated initial in blue and red ink. In addition to the Syon Abbey archive, the University of Exeter’s Special Collections also looks after Syon Abbey’s medieval and modern manuscript collection. Within this collection (reference EUL MS 262) is a folder containing fragments of manuscripts that were found c 1990 in the attic of Syon Abbey in South Brent, Devon. Upon looking through the folder, I was thrilled to find a fragment that corresponded to the newly discovered fragment in script, decoration, and fire damage. The newly discovered fragment has now been removed from the account book (a slip of acid-free paper marks the page from where it was removed) and has been placed with the other fragments in EUL MS 262/fragments. The discovery of this fragment and the reunification with its other half was a very exciting moment. It just goes to show that exciting things can be found in the most unexpected of places – especially in archives! Detail from a newly-discovered manuscript fragment in EUL MS 262/fragments.

Looking ahead to the next eight months…

Over the next eight months until the project completion at the end of March 2018, I will continue cataloguing the Syon Abbey archive and making the description of the records available for you via our online archives catalogue. I also hope to carry on promoting the archive in a variety of ways, including via this blog, on Twitter, and at conferences next year. At the end of the project I hope to leave behind an archive that is much easier to search and use, as well as some new highlights to share with you!