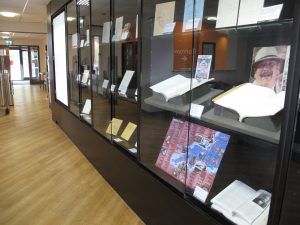 To mark Agatha Christie’s 132nd birthday, we are pleased to announce a new exhibition in the Old Library! The exhibition is open to everyone and can be viewed by entering the Old Library on Streatham Campus via the main entrance and walking straight ahead through the barriers. The display cases will be situated to your left.

In this exhibition we delve into the archives to explore a range of responses to the character Poirot from individuals including Agatha Christie, Edmund Cork and Harold Ober (literary agents at Hughes Massie and Co. Ltd), publishers, film producers, and actors.

This exhibition features items from the University of Exeter Heritage Collections. On display are letters and documents from the business papers of Agatha Christie’s literary agents; books from our Special Collections; and items from the Bill Douglas Cinema Museum collections.

Agatha Mary Clarissa Mallowan (née Miller), the novelist known as Agatha Christie, was born in Torquay, Devon, on 15 September 1890. She became, and remains, the best-selling novelist of all time. She died on 12 January 1976 at her home in Winterbrook, Oxfordshire.

Hercule Poirot, the famous fictional Belgian detective with the egg-shaped head, made his debut in Agatha Christie’s first published novel, The Mysterious Affair at Styles in 1920. In total, he appeared in 33 novels, two plays, and more than 50 short stories. He made his final appearance in the novel Curtain, written in the early 1940s but not released until 1975, the last novel published by Agatha Christie before her death.

The exhibition is expected to remain on display until January 2023.